Happy Holidays from the ManhattanNCS

As 2016 comes to an appropriately train-wreck-y end, we here at the ManhattanNCS wish you and yours the happiest, safest and healthiest holiday season as humanly possible.

Looking forward to a fresh start in 2017!
Posted by Steckley at 4:37 PM No comments:

Last chance to register for the 2016 ManhattanNCS Holiday Bash! 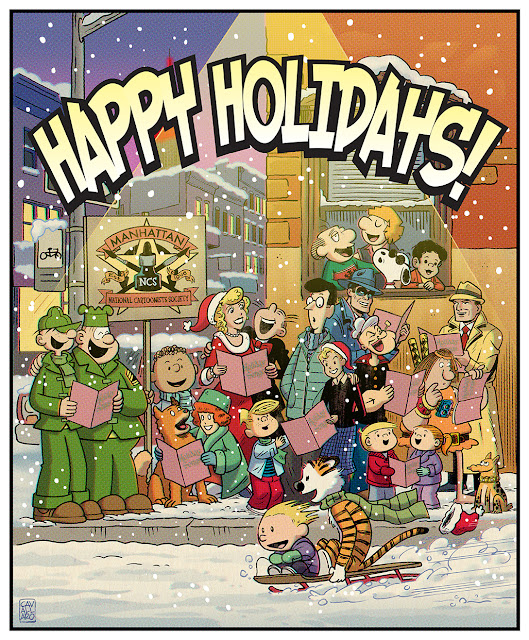 This coming Saturday is our last hoorah of the year, and I hope you'll come out and celebrate with us.

Hosted by the Manhattan chapter, this is our annual blowout that you certainly won't wanna miss.  We'll reminisce about the year that was, and eagerly raise a glass to 2017.

Join us for a full buffet and a chance to enjoy the holidays with our friends from all over the country.

Any questions, or to RSVP and pay at the door, please contact Ed, ed@edsteckley.com or call 413-478-4314.
Please  get your tickets or RSVP by this coming Thursday.

If you'd like to pay by cash or check at the door, please contact Ed, at ed@edsteckley.com.

Posted by Steckley at 1:59 PM No comments:

Longtime comics stalwart and Brooklyn native Angelo Torres is being given the Milton Caniff Lifetime Achievement award here in NYC, and you're invited! 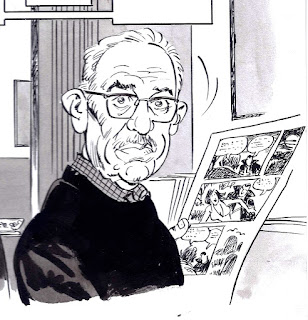 Angelo made a name for himself back in the 50s with his work at EC Comics, then Atlas/Marvel, all the way through his long stint at Mad.

Come on out later in October as we honor Angelo.  Some special guests will be making appearances, so this one will really be special.

Posted by Steckley at 1:37 PM No comments:

Here's the ManhattanNCS schedule for 2016!

Here's the Happy Hour schedule for the remainder of 2016... and the Holiday Party!
Put your drinking shoes on- We've got a number of events coming up!

It's been a while, but it's time to start up the monthly happy hours.
Here's the schedule:

All are at our usual happy hour spot.
$25 for all you can eat buffet, and tip!
Still the cheapest night out in midtown!
I'll send out reminders for all of these as they get closer. 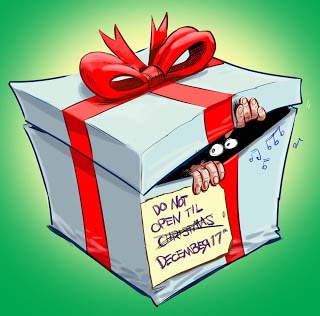 More details to come....
Posted by Steckley at 1:08 PM No comments:

Come out on later this month for a very special evening with a Pulitzer Prize winning editorial cartoonist Ann Telnaes! 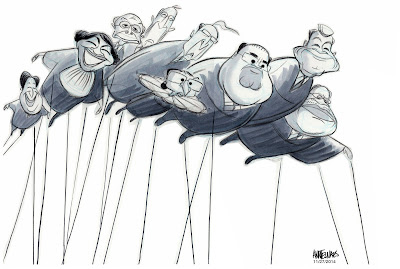 Come on out to see Ann's fantastic presentation and eat food while doing it!

Strict RSVP on this one-Either purchase your tickets now

A few things about Ann... 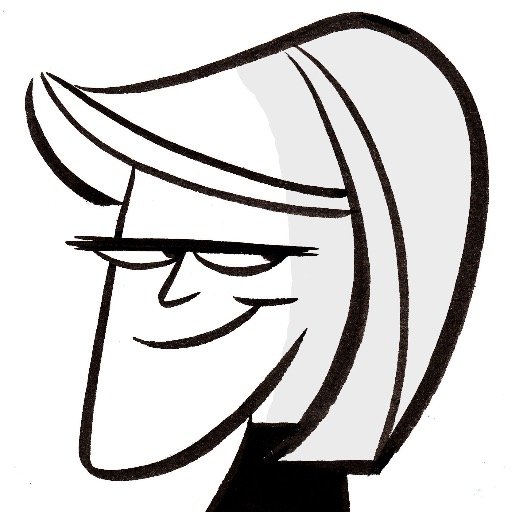 Ann Telnaes creates editorial cartoons in various mediums- animation, visual essays, live sketches, and traditional print- for the Washington Post. She won the Pulitzer Prize in 2001 for her print cartoons.
Telnaes’ print work was shown in a solo exhibition at the Great Hall in the Thomas Jefferson Building of the Library of Congress in 2004. Her first book, “Humor’s Edge”, was published by Pomegranate Press and the Library of Congress in 2004. A collection of Vice President Cheney cartoons, “Dick”, was self-published by Telnaes and Sara Thaves in 2006. Her work has also been exhibited in Paris, Jerusalem, and Lisbon.
Telnaes attended California Institute of the Arts and graduated with a Bachelor of Fine Arts, specializing in character animation. Before beginning her career as an editorial cartoonist, Telnaes worked for several years as a designer for Walt Disney Imagineering. She has also animated and designed for various studios in Los Angeles, New York, London, and Taiwan.
Other awards include: The National Press Foundation’s Berryman Award (2006) – The Maggie Award, Planned Parenthood (2002) – 15th Annual International Dutch Cartoon Festival (2007) – The National Headliner Award (1997) – The Population Institute XVII Global Media Awards (1996) – Sixth Annual Environmental Media Awards (1996)
Her television and radio appearances include: – The Newshour with Jim Lehrer – C-Span – NPR – BBC radio -Sirius XM Radio- The Editors, World Affairs Television, Canada.
Telnaes is a member of the Association of American Editorial Cartoonists, the National Cartoonists Society, The International Women’s Forum (Washington DC affiliate), and the American Newswomen’s Club.
Posted by Steckley at 5:09 PM No comments: 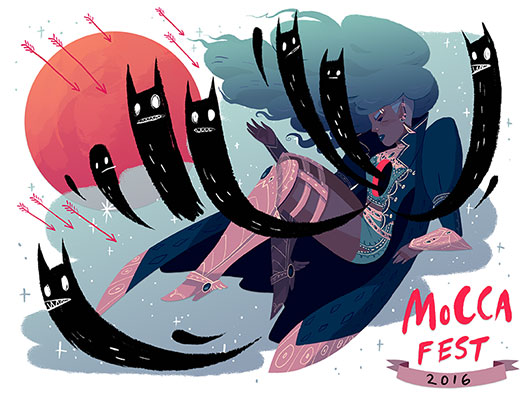 It's that time of year again-- the MoCCA Arts Festival 2016 is just around the corner, and the National Cartoonists Society's Manhattan Chapter will be there!

Admission to the 2016 MoCCA Arts Festival is $5 per day. Tickets are available to purchase at the door. Cash and credit cards accepted.  Children under 12 are free.
Mere steps from the High Line, MoCCA’s new host venue, Metropolitan West, is located on West 46th Street. Mere steps from the Hudson River Greenway and the Intrepid Sea, Air and Space Museum, MoCCA’s new host venue will encompass two floors of exhibitor tables, a gallery of original art showcasing the work of special guests, and pop-up cafés throughout the space.

Programming featuring panels by top artists and speakers focusing on current issues and trends will take place at Ink48, a boutique hotel located on the corner of 11th Avenue and West 48th Street. Overlooking the Hudson River, this contemporary hotel is found in the heart of Hell’s Kitchen and features spectacular views of the city skyline.

Posted by Mike Cavallaro at 1:21 PM No comments:

The Will Eisner Influence - A Discussion With Will Eisner's SVA Students 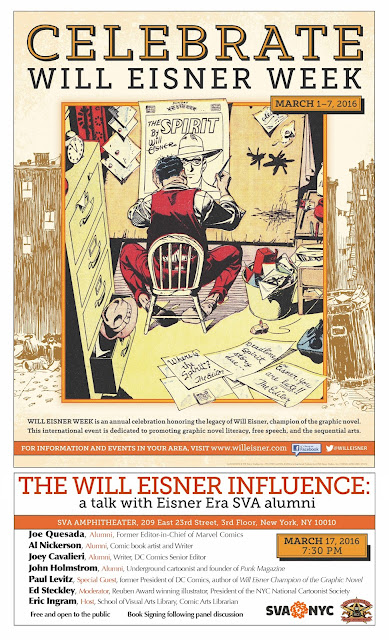 The SVA Library and the National Cartoonists Society present a panel discussion on the influence of pioneering comics artist and longtime SVA faculty member Will Eisner. The event is part of Will Eisner Week, a worldwise series of events celebrating comics, graphic novels and the legacy of the comics visionary. Panelists include Al Nickerson, comic book writer and artist,  Joey Cavalieri (BFA 1979 Media Arts), writer, DC Comics senior editor and BFA Cartooning faculty member; John Holmstrom, cartoonist and founder of Punk magazine; Paul Levitz, writer, former president of DC Comics and author of Will Eisner: Champion of the Graphic Novel; and Joe Quesada (BFA 1984 Media Arts), illustrator and former editor-in-chief of Marvel Comics. The discussion will be moderated by Ed Steckley, Reuben Award-winning illustrator and president of the National Cartoonists Society, Manhattan chapter.

Posted by Mike Cavallaro at 2:04 PM No comments:

Join us as we present
3 cartooning legends with the 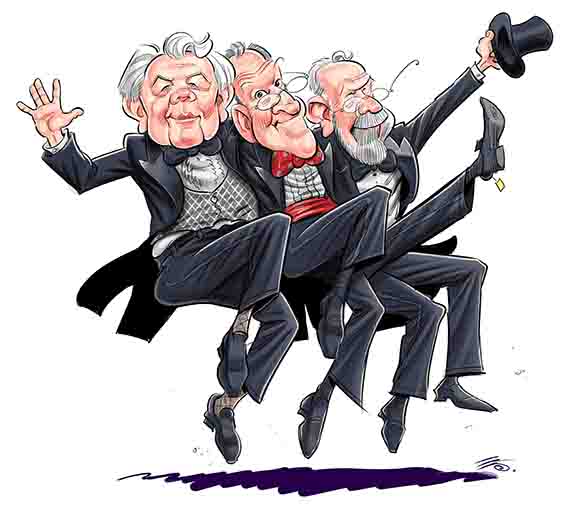 Our old pals Al Jaffee, Arnold Roth and Mort Walker are the next recipients of the prestigious NCS Medal of Honor, presented to past Reuben winners in recognition of a lifetime of work as well as their contributions to the cartooning community.

Join us for this once in a lifetime event, gathering of some of the most influential cartoonists working today.
Space is limited, so be sure to reserve your spot early.

Sorry, this event is sold out.

Email Ed by clicking here for mailing info or any other questions.


This special event is hosted by the ManhattanNCS
with generous sponsorship from:

The NCS Foundation
King Features Syndicate
Posted by Steckley at 11:07 AM No comments: